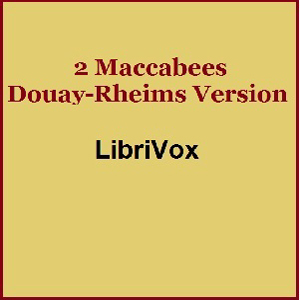 LibriVox recording of 2 Maccabees by Douay-Rheims Version (DRV).
Read in English by Adam; Lori Arsenault
The Book of 2 Machabees (more commonly rendered 2 Maccabees) is an abridgement of another work, now lost, which describes the events surrounding the defeat of Antiochus IV Epiphanes and the rededication of the Jewish temple in the 2nd Century BCE. It's canonicity (status as Holy Writ) was established later in the Christian era, and hence forms part of the deuterocanon (2nd canon). It is excluded from the Jewish bibles as well as modern Protestant bibles. The Church of England, in 1571, affirmed that 2 Machabees, as well as several other books excluded from the Protestant canon, "the Church doth read for example of life and instruction of manners; but yet doth it not apply them to establish any doctrine" (The Thirty-Nine Articles of Religion, Article VI).

The defeat of Antiochus IV Epiphanes is celebrated annually during the Festival of Hannukah, which is referred to prophetically in the Jewish Scriptures (Daniel 8, 11) and explicitly in the Christian Scriptures (John 10:22). (Summary by Adamski)
For further information, including links to online text, reader information, RSS feeds, CD cover or other formats (if available), please go to the LibriVox catalog page for this recording.

Uploaded by librivoxbooks on June 2, 2014